You spend all your life thinking others are expecting things from you.

“You do not have to be good,” goes my favourite line from Mary Oliver’s poem Wild Geese. “You only have to let the soft animal of your body love what it loves.”

It’s been a long road for all the members of SkyEyes, a.k.a. Big Bang Blues. SkyEyes is their new avatar.

Two band members held a day job, they finally realised they did not want that road.

and when they all got together, it was as a band with a former identity as a blues band.

Till they realised, hey, that’s not my sound. It’s so easy when the weight of others’ expectations is lifted from you. 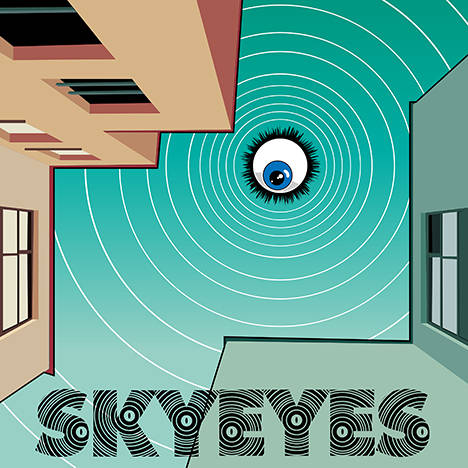 “Too many questions on my mind,
but it’s better than too many year gone by.”

Here’s a sneak tour of the North India Tour of the Album with the music:

The three other titles on the 22-minute EP are all from the same source: a freedom that arises from a feeling they are following within, and they do this together, as a band. SkyEyes does not conform to the market – this/these ain’t a love song – and they don’t conform to one brand – their blues sound is packed away neatly in another outfit called “Big Bang Blues”.

SkyEyes is the sound that comes to the band when no other eyes are watching, when your ears are turned to that inner sound and you’re listening to yourself.And now they’ve finally found that sound together: Diyatom Deb on the vocals, Akhil Kumar on percussions, Sushant Thakur on guitars and Barun Sinha on bass guitar.Perhaps you too would have sung the song “Betrayal” with all its clang and clamour like a lover’s spat. Perhaps you too would have that plaintive note in the Letter to my Father where you answer that you cannot answer to their expectations. Perhaps you too have the track of that Mad Man’s Tale playing in your mind, as you look around the world and you think what? What? What is happening?

It’s a short life after all, and we don’t know which one will be our last train home. It would be nicer if it were from a place where hard work and having fun were all the same to you.

You only get a sound so free with a lot of work.

That’s why SkyEyes got the very best backing them. Producer Dan Swift, who worked with some big names like Aqualung and Snow Patrol, worked with SkyEyes on the album, which also features the talent of John Davis who has also mastered Led Zeppelin and U2 tracks. Now that’s a lot of big names in one paragraph, but that is what can happen when you expect the very best from yourself.

That’s when you give your very best, because it’s the only thing you can give.

In Mary Oliver’s poem, it’s the screechy sound of geese welcoming you belonging into the world.

i sleep, i wake, i write chitra[dot]kalyani[at]gmail[dot]com
View all posts by CK →
This entry was posted in Album Review, Music. Bookmark the permalink.