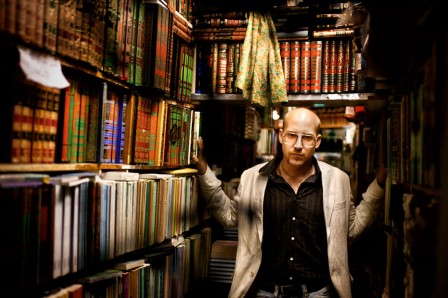 Word gets around in Cairo: that is probably the best and the worst thing about the city.

That is how your bawab knows who you’re (secretly) dating, how you find your Arabic teacher, and (if you’re a journalist) how you make your living in Um El-Dunya (mother of the world). And if you are doing all the above, that is how you write a book called “Playing Cards in Cairo.”

“Playing Cards” is a story by Hugh Miles born out of anecdotes, many of which were failed newspaper articles.

The summer of 2005 was no ordinary one in Cairo. Bombs exploded in Sharm El-Sheikh, and Miles began his courtship with his now wife, Dina, and who appears in his book as the character of Roda. The resulting book is a both journalistic observation and a love story.

“I was very lucky,” said Miles about access to different strata of life. Life as an expat-journalist saw him go from a “posh party at La Bodega” one night to the “slums the next day” for work on a story.

Roda’s apartment in “Muwazafeen” introduced Miles to tarneeb, that timeless game of cards played by Cairenes. Miles usually played the four-person game with Roda and her female friends, entering seamlessly into their conversation d.

In Roda’s house, we enter a “world normally hidden to Egyptian men.” Most notably, we befriend Yosra — whose anecdotes are both amusing and heartbreaking.

At 33, Yosra is depressed at her diminishing chances at marriage, for which she also seeks the counsel of an exorcist. Her pill-popping addiction is helped by her work at a pharmacy, and her life is restrained by an overprotective brother. Her escapades are therefore all the more romantic.

While many of these women’s stories were not newspaper-material, Miles began to keep a record. “I realized they would be good in a book.”

“People in the book know who they are, and were happy with the book,” said Miles. In fact some women presented the book thought Miles was not critical enough of Egyptian society. “They had suffered from [Egyptian men] and wanted to represent sexism in more detail.”

“It is not fiction,” no matter what category you file it under. “The people are true, the events are true. I just changed some of the names.” To avoid legal problems Mohandiseen is renamed in the book as “Muwazafeen.”
Miles reflects that, in fact, rather than being a story about himself, his novel is more about these women.

“Writing about Al Jazeera was a lot easier than writing ‘Playing Cards in Cairo,’” said Miles, who also authored “Al Jazeera: The Inside Story of a News Channel.”

“It is quite difficult to write about yourself,” notes the award-winning journalist, adding the process “brings questions about how much to give away.”

“Men expect women to operate to a much higher standard of morality than men do themselves,” Miles said, “This puts women in a difficult situation; the easiest way out is to lie and keep secrets.”

The caution is particularly necessary in Egypt where Miles says revealing these secrets “could cause a lot of damage to reputation.”

Especially in Egypt, where word gets around. In fact, that’s how I heard of Miles, my colleague at work told me about this Arabic teacher, and then….

Hugh Miles continues to work as a freelance journalist based in London. A movie script based on Cairo in the 1940s written by Miles is being developed for film. For more information on the author, visit http://www.hughmiles.com/.

i sleep, i wake, i write chitra[dot]kalyani[at]gmail[dot]com
View all posts by CK →
This entry was posted in Interview, Literature. Bookmark the permalink.